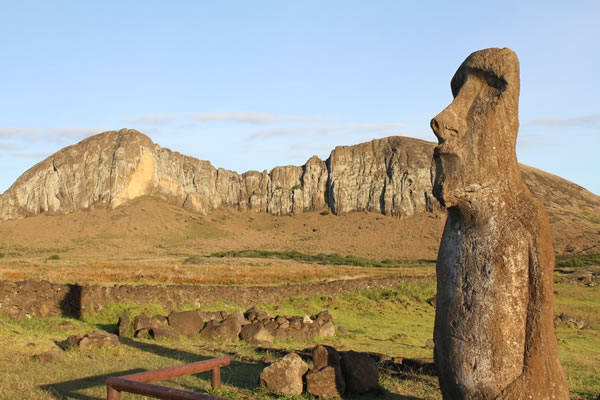 Rapa Nui, more commonly known as Easter island, is on the of the most remote inhabited islands in the world. Oral tradition claims that the island was originally settled around 1200 AD when a Polynesian colony took to the seas to flee from a neighbouring chief. By the 15th Century, the island had been divided into two communities who were warring for control of the island by the time the first Dutch settlers arrived in 1724. The Dutch reported seeing the fields of mysterious Moai statues, but it wasn’t until James Cook made land on the island four years later that the Western world learned that the statues represented former high chiefs, and each had their own names and ranks.

Unfortunately for the Rapa Nui people, tribal fighting was to continue until 1860. The island ecosystem was also in tatters, overrun by Polynesian rats and suffering from severe soil erosion. Struggling to survive already, between 1862 and 1888, 95% of the native population perished or left the island. Some were abducted by blackbirders to work in Peru and some emigrated under their own accord. With just 111 survivors living on the island at the end of this period, their culture and traditions were decimated. Among those lost, were the islands chief, his heir, and everyone literate in the rongorongo script, the only Polynesian script to have been found to date.

The island was given unprecedented assistance by a Tahitian prince known as Alexander Salmon, the son of a Jewish-English merchant who had a place in the royal Tahitian court. Salmon bought land covering almost the entire island and worked to firstly repatriate workers from his inherited plantation, and then to develop tourism and archaeological expeditions on Rapa Nui. He effectively ruled the island from 1978 onwards.

However, in September of 1888, Rapa Nui was annexed by Chile, by means of the ‘Treaty of Annexation of the Island’. The validity of this treaty is still contested by some Rapa Nui people, as Chile achieved sovereignty by buying a sheep ranch which constituted practically the whole island, and then declaring ownership. However it took until 1966 until the Rapa Nui people were granted Chilean citizenship.

Rapa Nui has been the location of many clashes between indigenous people and the Chilean government. In 2011, the UN intervened to express concern about the treatment of the islanders, and the improper use of their ancestral lands, and as of 2015 a local minority group of the Rapa Nui Parliament have rallied cries for independence.

Rapa Nui is an enigma. A remote island that was settled against the odds. A community that survived ecological degradation, civil warfare and colonialism. Saved by a Tahitian prince and then almost immediately annexed by a remote South American country, this tiny island has a rich, almost improbable history.

And yet it seems their dramatic history is not quite complete. Rapa Nui’s decolonialization and independence movement is rising, and perhaps in our lifetimes we might see the next chapter of their story.