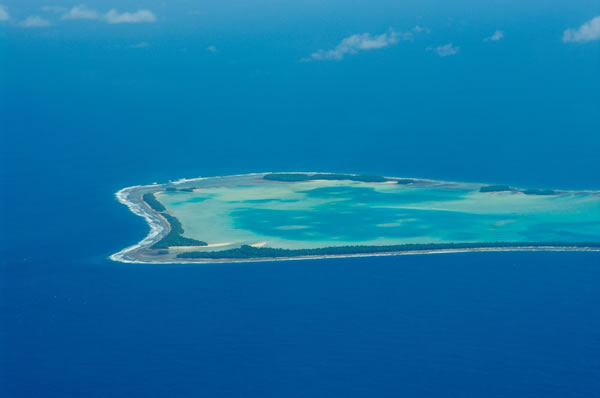 Tuvalu. Truthfully most people would struggle to pinpoint it on a map. And fair enough. It is officially the least visited place on earth with just 2,000 international visitors in 2017, and only one flight arriving in the country every three days.

So, what is it about this miniature island nation that we love so?

Tuvalu is incredibly remote. In fact, it’s a testament to the seafaring ability of the first Polynesians that it was inhabited in the first place. Tucked away far north of its more famous siblings, Fiji, Tonga and American Samoa, it’s easy to imagine a small dugout canoe missing the low-lying archipelago entirely. Next stop, the Aleutian Islands, Alaska

But Polynesians have an incredible ability to accurately navigate across vast open expanses of ocean. Navigators historically travelled to small inhabited islands using wayfinding techniques and knowledge passed by oral tradition from master to apprentice, often in the form of song. They observed the stars, the ocean swells, and other signs of nature to direct their small canoes around one of arguably the most inhospitable parts of the globe. Tropical squalls, volcanic activity and tsunamis. A terrifying lack of fresh water. And yet still they persevered. It is said that a Polynesian can always find their way home.

Perhaps it is due to this perseverance, this dependence on passing on oral tradition for their very survival, that Tuvaluan communities are very close-knit. Each family in a village has their own salanga or task which they perform for the good of the community. This could be anything from defence or housebuilding to fishing and weaving. The skills are passed down through the families, so each Tuvaluan child has an identity and a family business to join as they choose. Families also combine to form fusi- community owned shops. Here they can access cheaper goods, with lower prices for community generated produce. The communities are strong, yet reliant on one another.

However, unsurprisingly in a community whose lives are so interlinked, there need to be some rules. Falekaupule is both the name of the traditional island meeting hall, and the name of the council of elders that meets there. The council is responsible for making decisions and upholding the aganu of each island. The aganu is the traditional customs and culture. Every island is unique and has slightly different rules and customs, but a trend that unites the archipelago is related to marriage.

Very few people in Tuvalu fail to get married. Marriage is a highly important rite of passage to continue the family salanga, to establish new kinship, and to build bonds between islands. However, due to the small population sizes, Tuvaluans have created a concept known as ‘avoidance relatives’. These are opposite gender family members, up to third cousins. Traditionally they were expected to avoid one another’s presence completely. Today they are free to mingle, but they should avoid discussing certain more salacious topics. It’s an ancient system to ensure the health and survival of such an interlinked community.

However, this doesn’t mean that families are not united. Tuvalu has a wonderful system where a young person can name their best friend ‘brother’ or ‘sister’. The new siblings will then each marry a partner of their choice, and the two families move into interconnected houses to raise their children communally. Someone will fish, someone will cook, and all are welcome at the table.

With such a strong sense of community combined with the family salangas, it’s fair to say there’s not much in the way of competitive business on the islands. Tuvalu cannot exactly be described as a business hub. However, in the 1990s, Tuvalu showed typical ingenuity by exploiting a highly unusual source of income. For $50 million US dollars, the Tuvaluan government sold the rights to .tv, their internet suffix. They had quickly realised that television and film companies are willing to invest considerable sums to get access to a .tv domain. The scheme got off to a rocky start but is now the South Pacific Nation’s largest source of income. It didn’t take long to finance the full $100,000 that was required to join the United Nations and propel Tuvalu onto the international stage.

Although a member of the UN, Tuvalu is still relatively unknown in global politics. However, they are most talked about in connection with climate change. With a maximum elevation of 4.6m above sea level, the archipelago will be one of the first places in the world to become entirely uninhabitable if we cannot halt the rising sea levels. A suggestion was raised of relocating the entire population of Tuvalu to Australia, New Zealand or Fiji. The Tuvaluan government is naturally resistant to the idea of transplanting the whole country into another state, and instead is highly vocal about the importance of reducing carbon emissions and cooling the planet in order to save their home.

But should the worst come to the worst and Tuvalu is relocated out of range of the rising seas, it seems that their innate ability to sustain community, build ties and to always find their way home, will stand them in good stead. Although by no means the first nation whose borders are threatened by climate change, Tuvalu will be the first in our lifetimes which will need to take decisive action to alleviate the impact. Their actions will be an example and a model for us all, and that’s pretty impressive for the least visited place on earth.