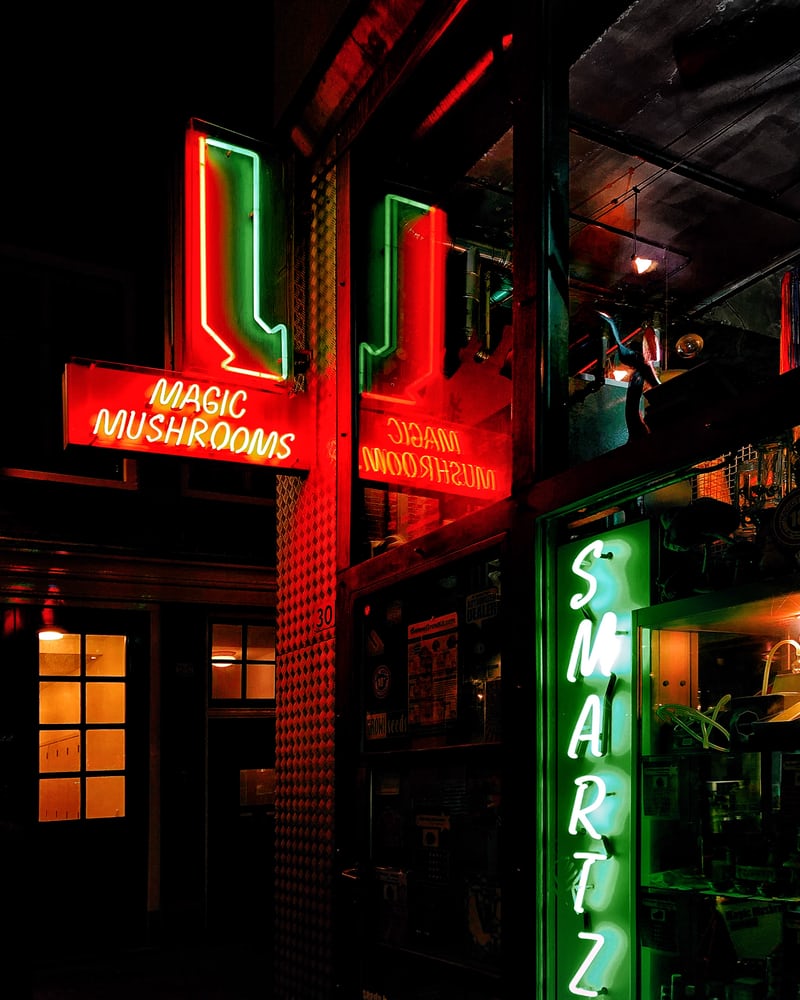 A subject that came up recently during a team lunch on Portobello Road, was ayahuasca ceremonies, and the impact altered states can have on mental health.

We have long been raving about the psychological benefits of travel, so of course we are also interested in studies examining the psychological benefits of other unusual mood-boosters. Did you know that ‘forest bathing’ is proven to reduce the production of stress hormones and lowers heart rate and blood pressure? Or looking at photographs of baby animals is scientifically confirmed to make you happier by causing a surge of dopamine?

As the legalisation of marijuana in certain U.S states and the public acceptance of the drug slowly makes its way across the globe, it’s interesting to look at other mind-altering substances (beyond coffee, alcohol, tobacco, Ritalin, Vicodin etc.) that might have a positive impact on our well-being.

At the end of 2019, the largest ever controlled study of psilocybin (the psychoactive ingredient in magic mushrooms) proved that the compound is safe for human consumption, bringing researchers one step closer to developing a psilocybin-based treatment for depression. Other research suggests that it could also aid those dealing with addiction. This could be a major development for those whose mental health problems haven’t improved with conventional therapy, such as treatment-resistant depression.

Our META Collection focuses on solving a variety of issues, using travel as a cure. Journey to Inner Space is designed as an arena for those struggling with pretty much any issue (except perhaps for agoraphobia) ranging from depression to a stale career. We believe that travel, when administered correctly and responsibly, can fundamentally reset our brains, our mindset and outlook on life. Travel can make us more self-reliant, more confident, more curious, and more aware of our place in the world.

Those familiar with the 1960s darling, LSD (or acid), might have come across the more modern concept of micro-dosing. Micro-dosing involves taking minute amounts of a normal dose, to achieve a state of highly present and creative focus. The results are sub-perceptual (none of the visuals or auditory manifestations you might experience with a full dose), users simply feel themselves, but a little bit ‘better’.

People might use micro-dosing to finally finish a creative project, and the movement is quickly becoming more mainstream. In the same way that 10 years ago, students might use Adderall to help them pull an all-nighter, young professionals and students are becoming more likely to be using imperceptible doses of psychedelics to open their minds and free them of mental blockages.

One of our team described the full experience of psychedelics to be ‘like finally opening a door to another reality that has existed next to you all along, but you just couldn’t see it before.’ The positive effects of a good trip can last for years, if not a lifetime, with both participants in studies, and recreational users, reporting that since their first dose they have felt happier, more emotionally aware, and more open to new experiences.

So, if we travel the world to experience new realities, different states and unknown communities abroad, how likely is it in the future that people will be consuming legalised and pharmacy approved psychoactives, in order to gain the benefits of travel, without the inconvenience of actually going anywhere?

Ayahuasca ceremonies are already a popular experience for travellers in the Amazon. The drink is brewed from the leaves of the Psychotria Viridis shrub, along with the stalks of a vine, andPsychotria Viridis ed for spiritual and religious purposes by ancient Amazonian tribes. Traditionally a shaman – an experienced healer – prepares the brew and leads the ceremony. The active ingredient in the leaves is DMT, a powerful hallucinogenic chemical that produces a more potent altered state than LSD. An ayahuasca trip can lead to hallucinations, out of body experiences and euphoria that will last many hours.

Today, many people travel to Peru, Costa Rica and Brazil where they can take part in multi-day ayahuasca retreats. Reasons to participate range from wanting to open one’s mind, to heal from past traumas, or to simply experience an ayahuasca journey.

A study of 20 people found that consuming DMT once a week for four weeks, was as effective as an 8-week mindfulness program. A study of 57 people found that rates of depression and stress were reduced immediately after consumption, and the effect was still significant four weeks afterwards. DMT is being examined as a potential ‘cure’ for Post-Traumatic Stress Disorder.

Intriguingly, drug use may be linked to travel in another way. Mexico is currently investigating legalising cannabis so that additional taxes can be used to kick start their economy after the COVID-19 crisis. If this goes ahead, perhaps Mexico might be one of the first American countries to be in a position to safely accept tourism.

Clearly an unregulated consumption of any psychedelic is not a sure-fire way of permanently fixing a mental disorder and can in fact make the symptoms worse. Psychedelics are mood-enhancers, not mood-improvers. They will connect you deeply with how you feel at the time you take the drug. If you are feeling unhappy or unsafe, then these feelings will be heightened, and can result in what is known as a ‘bad trip’. Anxiety, fear or lingering flashbacks are all common aftereffects of a bad trip. Even while on a good trip, you are at still at risk of participating in dangerous activities or losing complete control of what you’re doing.

Also, it’s impossible to know the purity or quality of drugs bought and consumed outside a lab setting. Although magic mushrooms are not poisonous themselves, it’s easy to confuse a psychedelic Liberty Cap with a highly toxic Fool’s Conecap, resulting in a quick trip to the hospital.

But if legalised, regulated and responsibly distributed, psychoactive drugs might become a mind-travel alternative to physical travel. Improved mental health, openness and acceptance of new experiences are shared benefits of both travel and ‘tripping’, so perhaps recreational drug use might become more socially accepted, as carbon-heavy travel becomes less so.

Tell us about your last trip, and having read this piece, your next.