Discovering Happiness at Home and Abroad 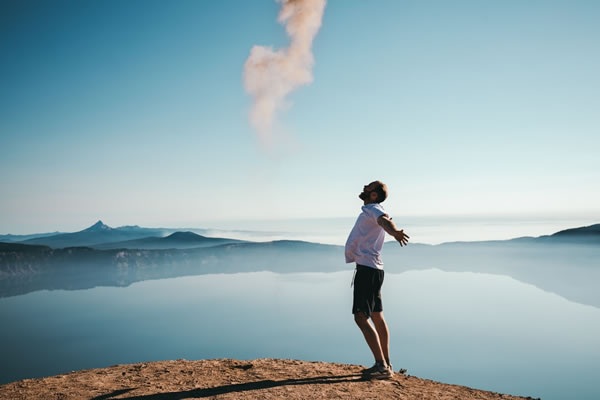 The pursuit of happiness is a fundamental right. It is mentioned in the US Declaration of Independence that all persons have the right to freely pursue joy, and live life in a way that makes them happy (as long as they don’t do anything illegal or violate the rights of others).

Does the fact that the USA has this right enshrined in their constitution indicate that the USA is a happier country than others? How does happiness differ in your home country and abroad?

Scientific institutions have for years studied human happiness in different countries. Subjective satisfaction with life can be measured by directly examining the population. Famous studies include the ‘General Social Survey’ in the USA, or the ‘Eurobarometer’.

Neuroscientists also study the phenomenon of human happiness. Testing has revealed that individuals with an above-average active left cortex (the side of the brain associated with language and planning), are generally more satisfied with life. This observable feature is supported by self-assessment, as those with active left cortexes describe themselves as very satisfied, tend to smile more and are at lower risk of suicide.

From this research we can determine that some people are inherently happier than others. But are these people scattered across the globe, or are they centralised in specific locations and countries? What are other factors that contribute to happiness?

Veenhoven, the Dutch happiness researcher, compiled a survey to compare the happiness of nations. He named this the ‘Happy Life Expectancy’. He asked citizens to rate their happiness on a numerical scale, and then applied the average life expectancy of that country to generate the final score. The results showed a relationship between the length and happiness of people’s lives, and how the rights and duties of their society fit their needs and abilities. By this measure, Switzerland regularly tops the Happy Life Expectancy.

Austrian researcher Ernst Gehmacher pinpointed two essential components of a happy society – human capital and social capital. Human capital is the quality of human labour that is generated through education systems. Social capital is harder to define. Along with his partners, Kroismayr and Neumuller, Gehmacher discovered that social capital is generated in two ways. One way is by bonding within a social entity (such as with family, friends, country or the world), and the other is by relating to social entities outside or above the first group. This second method is known as ‘bridging’.

So how can the science of happiness be applied to discovering happiness in the real world?

Well at home, the research suggests we can generate happiness by interacting with our communities. But happiness is not entirely down to our communicative abilities. Professor Gehmacher argues that “happiness can and must be learned”, in the same way you can learn to be creative, or sporty. “Happiness is like any other muscle in that it can be developed”, according to Miriam Akhtar, quoted in the British Positive Psychologist. If we think of happiness as a skill to be learned, then we can work on and develop it. The science has shown that an active left cortex is directly related to happiness, so by practising communicating, planning, reading and writing, can we also generate happiness?

Professor Yew Kwang Ng of the Monash University offers the opinion that we must concentrate on the four Fs of happiness. Faith, form, family and friends.

Faith does not necessarily mean religion but can be interpreted as faith in your own abilities. Professor Paolo Verme from the University of Turin stated that “we are happier when we believe more strongly in our own abilities and efforts than fate and destiny”.

Form is keeping fit, challenging your body and mind. Growing your physical and mental strength.

Family and friends are vitally important to generating happiness. Humans are innately social animals, and we are in general, much happier when we are connecting with other people.

Travelling abroad is an intriguing way of creating happiness. Humans thrive on change, connectivity, creativity and new experiences. By travelling to other countries and communities, we can titillate our minds with new modes of being, new experiences and new learnings. We can accrue social capital by meeting and bonding with foreign cultures and people. Going on holiday for most, is seen as a quick fix to generating happiness and it works – to a degree.

Dutch research has found that people who travel are only marginally happier than people who don’t. However, for those who travel, one of the happiest times is during the holiday’s anticipatory period – before travelling anywhere. This is, in effect, free happiness.

Looking forward to traveling generates as much joy as being on the holiday itself, without the stress of logistics, culture shock or forgotten phone chargers. And yet, this period often overlooked by the conventional luxury travel industry.

And it is worth noting however, that travel can become an addictive form of happiness, rather than a sustainable one. With each trip we become more worldly, more globally aware and the excitement of travelling can fade. So we take more holidays, spend more money and chase the memory of previous adventures or the excitement of new.

This process of getting used to something is known as ‘hedonic adaptation’. It’s a valuable process that has ensured our survival. However, in the luxury travel realm we are researching new ways to minimise or defer this kind of adaptation that leads to negative outcomes rather than increase happiness.

This is one reason we need to start thinking differently about travel. We need to think about WHY we travel, whether our travels are really generating happiness and if so what kind. American poet and philosopher Henry David Thoreau said, “happiness is like a butterfly: the more you chase it, the more it will elude you”.

It seems that wanting to be happy is what can make people unhappy. Thoreau recommends if you turn your attention to other things, happiness will come gradually. Ancient Chinese philosopher Lao Tsu expressed this idea as “seek happiness not too greedily’.

There is no precise formula to being happy at home and abroad. But by examining the science, we are learning more about it. And by thinking differently about travel and applying those insights in the work we do we can make a positive contribution to people’s happiness.

It has been suggested that the science of ‘self-help’ that is so popular in the West, is not an applicable concept in other communities where the emphasis is on the wellness of the group as a whole. By travelling perhaps we Westerners could learn something about happiness, from the people we meet.

So before you travel next, think about why you are travelling. If the holiday is to make you happy, make sure you incorporate elements and apply techniques that will generate happiness. Don’t rely on the travel itself to make you happy, as sometimes you might find that what makes you happy, is actually right here at home