The Hyena Man of Harar 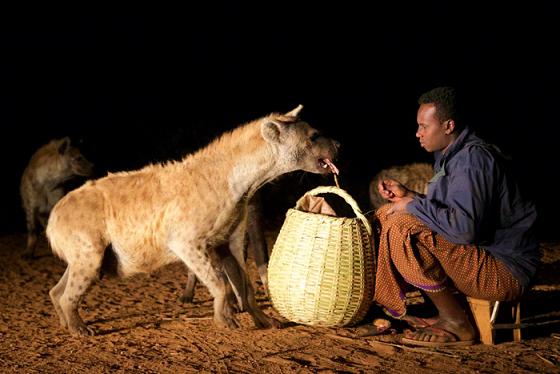 Hyenas have long been demonised, but the inhabitants of a small city in the foothills of the Chercher Mountains in Ethiopia feel admiration, not fear, for these misunderstood creatures.

Legend goes that centuries ago, during a time of famine, starving hyenas would keep attacking the people of the city.

Muslim saints gathered together with the hyena leaders and formed a treaty to feed the hyenas porridge, in exchange for the protection of the inhabitants.

The belief was that hyenas ate the djinn (evil spirits) when feeding on the porridge. They also scavenged the scraps left by the people, cleaning up some of the city streets. A respect was established between the inhabitants and the hyenas. Domestic animals were even locked up at night and low openings were created in the city walls to allow the animals to come and go freely.

Although the practice died out, in the 1960s a farmer named Yusuf Salleh started feeding the hyenas scraps of meat to deter them from eating his livestock. He became known as the hyena man of Harar.

The locals believed that Yusuf could speak to the hyenas. He fed them for nearly half a decade, before training his son, Abbas, to carry on this unique job. By this time, word had begun to spread and  people now come from far and wide to witness Abbas call each member of the clan by name and feed them directly from a stick in his mouth. The city hasn’t been attacked since Yusuf began his nightly ritual.

There’s a saying in Harar, waraba nasib, which means hyenas’ luck. Every year since the 16th century, to keep the luck going, residents have marked the birth of Prophet Mohammed by leaving an offering of porridge, mixed with butter and goat’s meat, on the Hakim Mountain. The mountain is a holy site where the ancient Muslim leaders of the city are buried.