Listening to the Silence 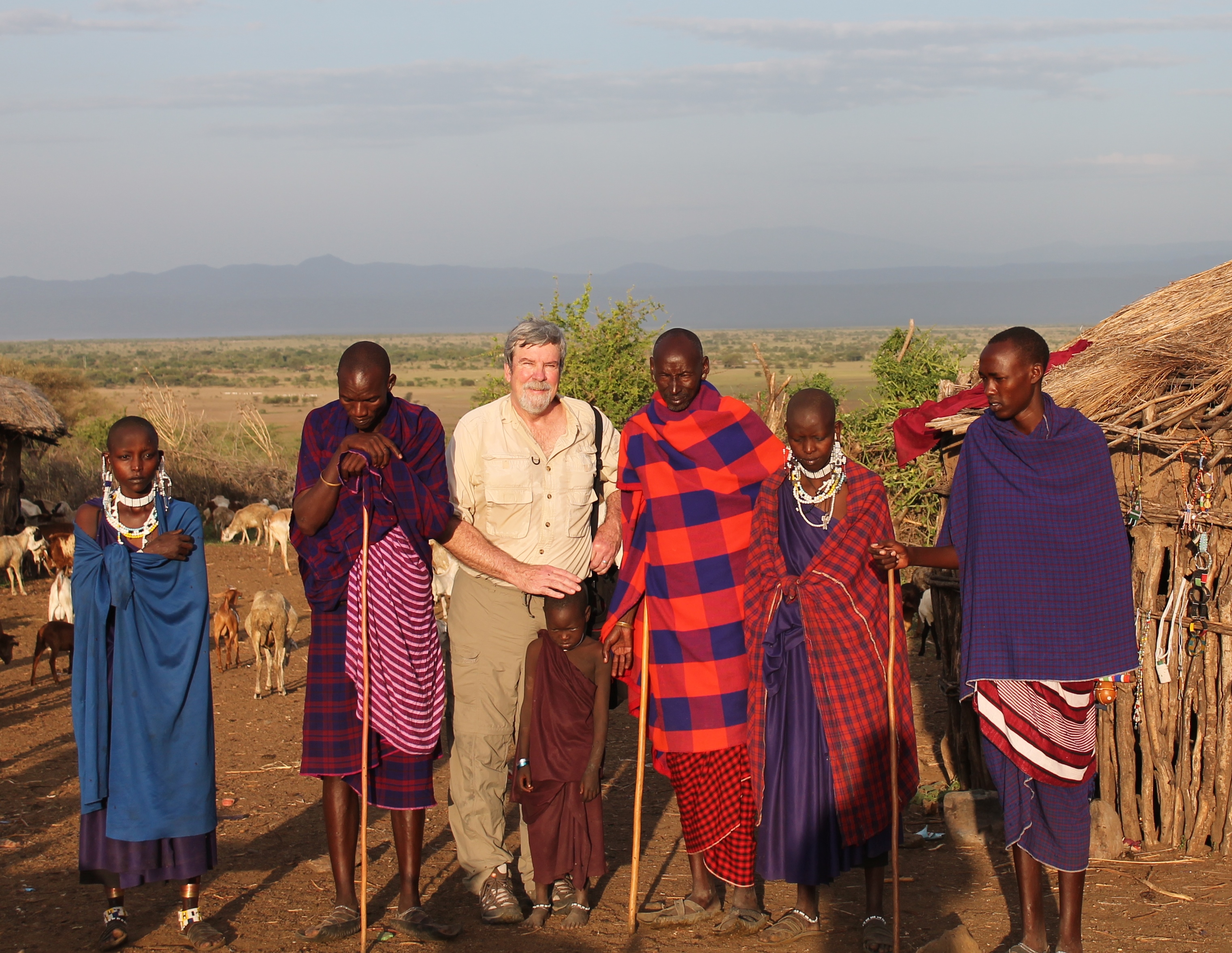 Polé is a Swahili word that means slowly. I first heard it on the lower flank of Kilimanjaro in Kenya, East Africa. It would, in time, become one of the most important words in my life.

Although approaching 50 at the time, I still held vestiges of the naiveté of youth that convinces us of our immortality. It had long been my way to charge straight ahead while on the road, taking in all I possibly could in the time allowed, always afraid I would miss something, and counting a trip successful by how many new sites I had visited. I saw no reason to alter that course just because I was climbing to the roof of Africa.

Geoffrey, my stalwart guide, kept urging me to go pole ́polé as we passed one trekker after another on the trail until he gave up trying, lagged behind, and forced me to slacken the pace, but by then the dye was cast.

He knew I was angry at him for him holding me back but he just took my gaze and said, “Polé is the only way here.”  Later, at 3 a.m., on a perfect night made for climbing and only a thousand feet from the 19,341 foot summit (5,895 meters), I collapsed, spent and frustrated. I lay on my back gazing at more stars than I had ever seen, sucking air like a drowning man, and totally defeated in a pursuit for the first time. Geoffrey just picked up my pack and quietly said, “No one climbs the mountain unless the mountain allows it.” He believed that my arrogance had defeated me. His words were a heavy weight to bear as I silently followed him polé down through the scree field, realizing then that ignoring his wisdom had cost me the summit.

It was a long flight back from Africa as I was overwhelmed by memories that lacked detail, a litany of all the places I had visited but could only vaguely recall. I had been looking but not seeing, traveling without ever having been. Travel was my passion but I was only passing through. Maybe there was something to this polé stuff.

Lessons come to us in the most unexpected ways, in the most remote places, and it is usually in hindsight that we recognize these moments for what they are. That night on the mountain had revealed to me that my see-all approach to travel had been preventing me from seeing anything at all. However, changing aspects of one’s nature is easier said than done.

Not long thereafter, I was introduced to an elder of the Maasai nation by a mutual friend. The Maasai are an ancient people, nomadic herdsmen with a formidable history as warriors. Moses, had invited me to his village in the rural savannahs of southern Kenya. No sooner had I arrived than my new, slow travel plans went out with the dawn when I was overwhelmed by the color, smells, and sheer noble pageantry that is the everyday life of these people. Where some walk, the Maasai stride, and where others stand, the Maasai pose. I had never witnessed such dignity, poise, or sense of self-worth. The entire village projected a regal but heartfelt air that I could feel wrapped around me like a blanket. My new mantra of Poĺé was left by the wayside as I regressed to my usual self, rushing about with a camera in front of my face; behavior which everyone in the tiny village found very entertaining. Moses took it all in with the bemused look of a kindly father and then asked me to walk with him.

Moses was stately in his long red shuka (Maasai robe), and carried an enormous walking stick that could be likened to an Irish shillelagh only much larger. It was also his staff of office. The Maasai have no chiefs, only elders, and Moses, I soon found out, was at the top of the food chain, not due to power or intimidation, but because of his kindness and wisdom. I noticed that Moses’s tread made no noise, while I sounded like a buffalo crashing through the brush. He spoke softly, almost in a whisper, and his face held a perpetual smile as though painted by Leonardo.

He seemed to float through the landscape as an organic part of it. He spoke of his life, growing up with wild animals, and reckoned he was probably close to ten when he first heard a mechanical sound. He was not just an observer of his world, but understood it in the most primal sense. His was a different world than mine, and I found myself calming down in his presence, realizing he was imparting knowledge learned by his people through centuries. He was teaching me in his silent way, a way that did not betray the process.

When he too used the word polé, it struck home with new force.

We walked throughout the day and time did not follow us. Moses was the first person I ever met who truly lived in the moment and the joy he took from this was in constant evidence. He saw a ballet in the jump of a fish and heard an aria in the song of a bird. He pointed out creatures I never would have spotted, and had the Maasai gift of storytelling, ending each tale with a moral twist. It took three of his parables before I realized that he was showing me how to look at the world through the eyes of a child, as I once had gazed, but which the modern world had clouded over with distractions and my own self-importance. Polé was starting to make sense.

Before I left, he pressed a small river pebble into my palm and told me to keep it. He said it had power and I was to think of him whenever I touched it. The power was in his words, and soon that pebble became my trigger; a constant reminder of the awe and wonder that is all around me. It was my guide, whispering to me from my pocket that I was surrounded at all times by creatures and events much larger than myself. Most importantly, the pebble was a reminder to stop wasting time.

My travels continued to take me further off the beaten path into more and more remote cultures until I found my attitude shifting from “These poor people” to “These are such happy people.” There was no sense of passing time in these places because life was lived according to the cycles of the earth. As my days in such places grew, my internal clock slowed.

Gradual immersion in remote cultures began to alter my world vision until I could imagine it before modern technology and I liked what I saw. By escaping from the trappings of the material world, at least temporarily, I was experiencing the natural world in real time for the first time, and it was a revelation. Moses had told me that when you are quiet, all you hear are the sounds of the earth. As I learned to slow down and listen, the sounds began to emerge. The earth was playing a symphony.

Thanks to people like Geoffrey and Moses I came to realize the gift I had been given. I was not only privileged to travel through these remote societies but had the ability to write about them. Many of the people I visit have no written language, and if or when they disappear their loss will leave a gaping hole in the collective consciousness of mankind. By slowing down and immersing myself in these vanishing cultures I have been able to share them with the world at large that might otherwise have no knowledge of their existence. My books and articles have given them a voice, in some small measure, where there was none before, and that in turn has enriched my own life beyond measure. I now feel I have true purpose, but had I not learned the meaning of the word polé I might still be passing through the world wearing blinders.

Our lives are an evolutionary process in which we change at a glacial pace, influenced along the way by the unconscious details and nuances of all that surrounds us. Living in an industrial nation my life is, by necessity, geared to a faster pace. At home, I am surrounded by media and electronic screens. The sound of an engine is never far away. Sirens, helicopter rotors, and ringing telephones are all part of life in the big city that will only become more dependent on technology. But this commotion does not have to dominate life. In modern surroundings it is no doubt far more difficult to listen to the silence, but once a pilgrim sets foot on that road, there is no turning back. It took time to learn to appreciate the beauty of a sparrow on a phone line, or to listen to the flap of a butterflies’ wing, but now, my God, I see that there is art and music all around me.

My pebble is still with me at home after all these years. It reminds me to step outside at night and gaze at a full moon rather than a television screen, and it whispers of the inherent beauty of a spider’s web. It tells me how much I enjoy the chirp of a cricket, and the expanding ripples of a rain puddle. One can be awed by the wonders in a grain of sand if you have an open heart.

The natural peace of the world is gradually being pushed aside by manmade distractions, not all of them bad, while others are quite necessary, but that same ancient peace once enjoyed by our ancestors is still accessible. All you have to do is slow down and listen to the silence. It will come to you.

James Michael Dorsey is an explorer, award winning author, photographer, and lecturer. He has traveled extensively in 45 countries, mostly far off the beaten path. His main pursuit is visiting remote tribal cultures in Asia and Africa. See his bio for more about James and his articles for Transitions Abroad. Visit James Dorsey’s website at www.jamesdorsey.com.

If you would like us to design a trip to help you travel slowly, get in touch.