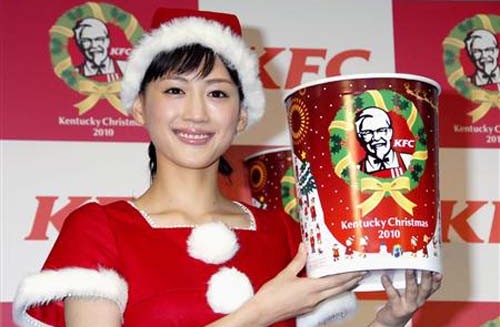 As we celebrate this festive season in the UK, we think of mince pies, decorated Christmas trees and a jovial man in a red suit baring gifts. It is a time for families, feasting and fun. Nowadays around the world people of all faiths come together to mark this once solely Christian holiday.

Today each country now has its own interpretation of Christmas traditions and of Santa Claus, not all of which are quite as friendly as the more commonly known beloved white-bearded present giver.

In Panama, many celebrate the Christmas season by creating a life-sized muñeca, or doll, and leaving it outside their homes. Panamanians begin to papier-mâché their muñecos in early December, modelling them on celebrities, public figures and politicians whom they do not wish to see any more of in the New Year.

It’s a creative way of taking a last, long look at a despised or ridiculed personality before expressing your antipathy in a festive bonfire, or more recently, an explosion of fireworks. The muñecos remain on display in front of Panamanian homes throughout the holiday season, before they are toasted with a drink of seco (sugar cane alcohol) and ultimately burned in effigy on New Year’s Eve.

Whilst in the UK and US children are kept on the straight and narrow with threats of receiving coal, in Iceland it is a much bleaker affair. In years gone by, kids would be told about a woman named Grýla, who lived in the mountains with her ageing husband and 13 sons (The Yule Lads). Grýla was hideous. She was half ogre, half troll, and she had hooves, horns, and 15 tails – not to mention large warts on her nose.

Since Grýla’s family lived in the mountains, they didn’t have a lot of dinner options. So she would send The Yule Lads (with names like Spoon Licker, Window Peeper, and Meat Hook) into town, where they would snatch unruly children and bring them back to be cooked in a stew. Understandably this somewhat terrified children so in recent times, the legend has changed so that now the Yule Lads travel down, one at a time, wearing a red-and-white suit, to place gifts in shoes that children leave on their windowsills. If the child of the house is good, they receive a small toy; if they’re bad, they get a rotten potato.

Japan never really celebrated Christmas until very recently but now thanks to a very successful marketing campaign has its own typically unique interpretation.

It all dates back to 1974, when Kentucky Fried Chicken began its “Christmas Chicken” campaign. The idea was started after a group of foreigners ended up at KFC upon learning that it was impossible to find turkey in Japan. The campaign was a hit, and now KFC sells a full Christmas dinner - complete with chicken, wine, cake and champagne - for about $25.

The tradition has now got so popular that lines at KFC stretch out the door on Christmas and you can even order your bucket of fried festive food months in advance.

If you’d like to learn more about Christmas beliefs and traditions then contact us and let us help you sort fact from fiction.