Around the world on flying hooves 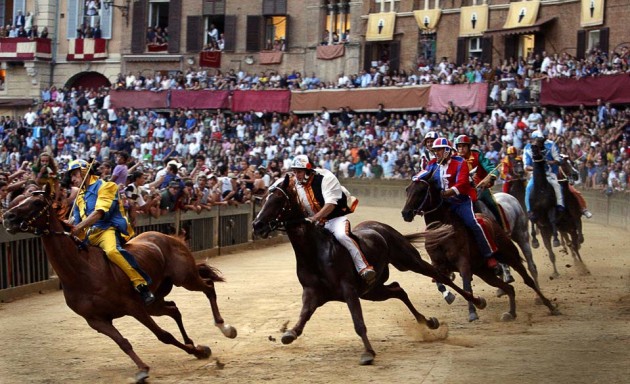 To win this tumultuous race the first horse must cross the line - with or without its jockey. The race is preceded by an impressively bombastic two-hour pageant known as Corteo Storico, where flag bearers dressed in medieval costumes and a throng of Carabinieri on horseback wield their swords. The competition itself is serious stuff, representing an ongoing rivalry between the 17 contrade (districts) of the city. Before the race horses are taken into churches to be blessed, and the winning contrada is presented with a prize of silk, at which point start the hefty celebrations, continuing far into the night.

Galloping over from Italy to Argentina, another event we highly recommend experiencing is the weekly Feria de Mataderos, taking place from March to December in a far flung barrio of Buenos Aires. Each rider has a chance to prove himself in the Carrera de la ortija (Race of the Ring), a competition dating back to the arrival of the Spanish conquistadores, and which is still played out on the pampas.

Be part of the passionate crowd, watching intently as the gaucho (Argentinian cowboy) flicks his whip from side to side on the horse’s flanks. The aim of the game is for the gaucho to spear with his lancet a tiny metal ring (the size of a wedding band) as it dangles on the end of a thin red rope. This of course all takes place at breakneck speed.

Would you like to experience the exhilaration and passion of traditional horse-racing in incredibly unique surroundings? Why not simply get in touch.